If you don't provide an authentication manager and a server does not reject anonymous requests (for example, a server can be world-readable, and you are performing a checkout) everything should go well. But if it's not so and the server challenges you for credentials, you will certainly get an exception since there's no authentication manager provided.

The whole authentication manager is based on the following four logical blocks:

On the diagram each logical block is followed by a corresponding interface (in a bold font) provided within the auth package. These blocks are like pinions of a gear, in our case - of an authentication gear that is used within SVNKit. Such a structure allows you to replace different blocks while the authentication manager itself remaining the same. Let's look at those blocks closer. 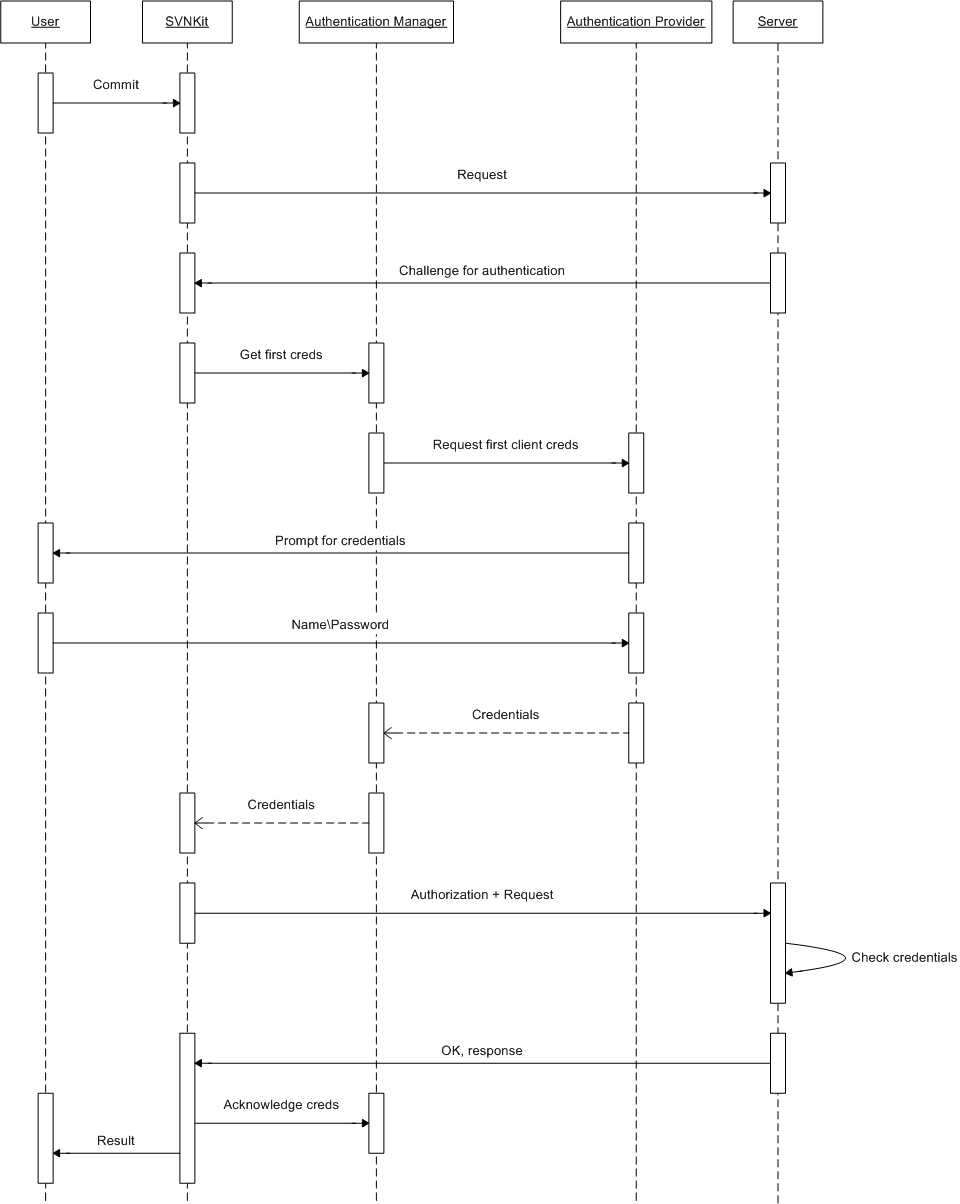 The above sequence diagram illustrates a commit process performed by SVNKit.

But imagine, that the user has mistyped his password. 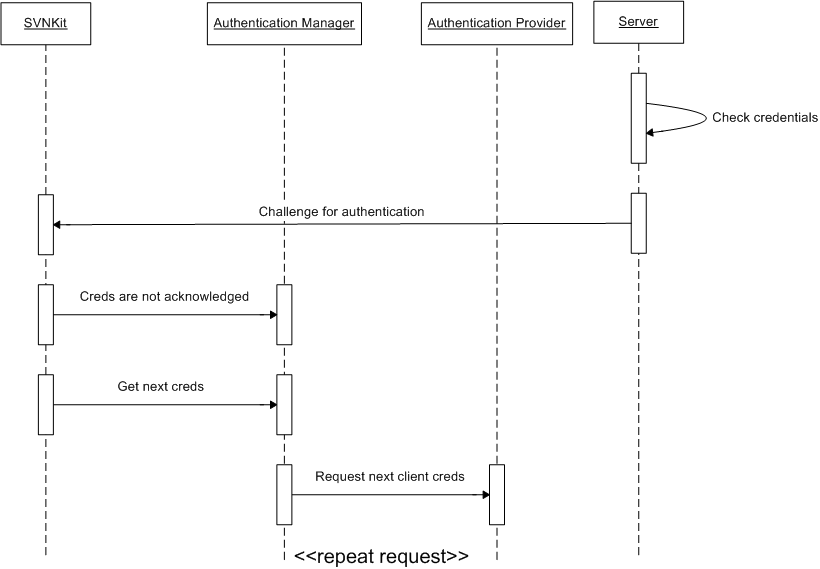 SVNKit keeps on asking the auth manager for the next credentials until either the server acknowledges some of them or the auth provider (hence the auth manager, too) runs out of credentials (returns null). In the latter case SVNKit throws an SVNAuthenticationException.

The following is a table of different kinds of auth credentials and subclasses of SVNAuthentication which correspond to them:

These kinds are provided by SVNKit to the credentials-getter methods of an authentication manager. And an auth manager provides them to its auth provider.

This block is represented by the ISVNAuthenticationStorage interface. SVNKit implements this interface as a run-time in-memory storage for credentials of different kinds. In our previous example the auth provider can store login\password provided by the user in such a storage, so that later credentials (acknowledged by the server and stored in the run-time storage) may be reused without prompting the user again.

If an authentication manager provides a non-null proxy manager, SVNKit interacts with a target server through a proxy server represented by the proxy manager.

This block is represented by the ISVNSSLManager interface. When a secured http connection is used (https://), and this manager is not null, it's used by SVNKit to create SSL encrypted sockets (i.e. such a manager provides an appropriate SSL context). However if no SSL manager is provided by an auth manager, SVNKit uses a default one which, of course, knows nothing of user certificate files. But this default one will provide an SSL context for creating SSL sockets as well as receive server certificate file.

This implementation has the following features:

On Windows machines name\password credentials are often stored encrypted. Unfortunately, SVNKit is not able to decrypt such credentials, therefore they are not used (just skipped).

The class which is responsible for instantiating DefaultSVNAuthenticationManager objects is SVNWCUtil.

This is another very simple implementation of ISVNAuthenticationManager. Its has got the following features:

You may provide an array of different SVNAuthentication credentials, your own specific proxy and ssh settings to such an auth manager and then use it in SVNKit.

Although one of the Subversion advantages is that you do not need to authenticate yourself until a server challenges you, sometimes it may be effective to have an ability to make SVNKit immediately authenticate a user without wasting time. The ISVNAuthenticationManager interface provides this ability: it returns a flag which SVNKit uses to control such a behaviour.

SVNKit supports the following http auth schemes (for both server and proxy authentication):

In the NTLM auth scheme you also provide a domain name: